What is the Most Distinct Part of Azerbaijani Culture? 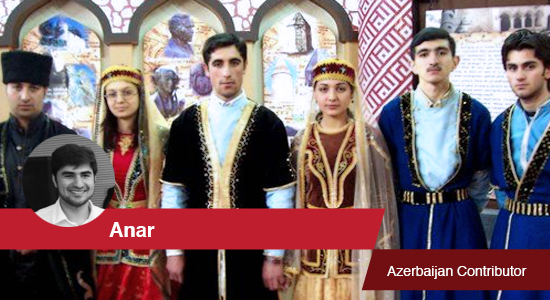 "About traditional dress: honestly, I really like to wear them. I even participated in a particular event as a staff member who exhibits Azerbaijanian dress."

Last century, Baku was one of the best musical cities of the USSR. In 1908, the prominent Azerbaijanian composer Uzayir Hacibeyov, wrote the first opera. During the 20th century, our community was significantly interested in cultural events. Operas, cinemas and exhibitions were all popular.

However after the war, cultural development started to wane as a response to the occupation of lands by Armenia. This occupation led to the flow of people to Baku which ended with a cultural shock in Baku.

Lately, young people are more likely to attend cultural activities rather than adults. Personally I am not a fan of cinema, but I do love to go to art galleries when I have time. My peers are most attracted to the cinema. Nobody can judge people for that! :).

About traditional dress: honestly, I really like to wear them. I even participated in a particular event as a staff member who exhibits Azerbaijani dress. Our culture is really close to our neighbours. Most of the cultural beliefs and traditions are almost the same.

The measurement of how to behave around people is a really important aspect of Azerbaijani culture. This is especially true outside of Baku, where smaller places are affected by the theoretical aspects of religion and where rates of education are below average. Baku is more tolerant and a good place to live without these measurements.

When talking about Europe and USA, it is really far from our understanding and life. However, the modern world is more complex than the past. Today the communicational and informational advances have led to more connections between countries all over the world. There is now no doubt that any crisis in the US or Europe, either economical or cultural, will affect not only our country, but also the every other.

“Baku is a bit crowded, however it is possibly the best of the country 🙂”

Next article What is the Most Distinct Part of British Culture?
December 18, 2016