Azerbaijan is a multinational country with many ancient traditions and holidays. These play a very significant role in citizen’s lives.

Additionally, when Azerbaijan obtained independence it established new series of memorable days which became public holidays in the country. All the holidays in Azerbaijan can be divided into national, professional and religious ones.

Out of the many religious holidays in Azerbaijan, Kurban Bayram (a feast of sacrifice), Ramazan Bayram (a holiday after fasting), Novruz Bayram are most special. Novruz is a holiday based on nature and ideas of renewal and fertility. It has been observed in Azerbaijan since ancient times, when its population followed Zoroastrianism. Religious holidays in Azerbaijan are public holidays and celebrated for several days. Novruz is officially celebrated from 21 to 24 March (as in the table above).

In addition to the holidays, Azerbaijan also observes other memorable days such as Martyrs’ Day, which is also a public holiday. Besides them, memorable days of special importance for Azerbaijan are: the Day of Youth in Azerbaijan, Day of Remembrance for Victims of Khojaly massacre, Day of Knowledge, and Day of Azerbaijani Oil.

Azerbaijan holidays are celebrated with relatives and friends. Usually, public open air celebrations are held and fireworks are let off during the days of the national holidays.

Novruz is one of the most celebrated national holidays in Azerbaijan. Celebrating spring and the beginning of the ‘persian’ New Year, Novruz means ‘New Day’.

Novruz is celebrated during the spring equinox, where days have an equal amount of light and dark, partly symbolising the coming of the longer days and warmer weather. A long awaited event, Novruz is celebrated for a full month lead up to the holiday, very much like a festival. Tuesdays on the lead in week will celebrate different elements:

This celebration of the elements can be traced up to 5000 years, to Zoroastrianism, a religion which celebrated elements and saw fire as the light towards ‘God’.

Activities during the festival and the leading Tuesdays include familiar springtime activities such as cleaning the house, planting trees, and painting eggs.

The evening before Novruz’s official date Azerbaijani families will visit graves of their relatives and eat a large meal together as a family. Eating at least seven different traditional dishes together around a table traditionally decorated with a copper plate and a painted egg to symbolise each member of the family.

The UN officially marks 21st March as International Novruz Day each year, however this is changeable for most who celebrate to run in line with the equinox. Novruz has been marked in the UNESCO list of intangible cultural heritage, meaning that action will be taken to ensure its longevity for years to come. This is especially important to the Azerbaijani people as during the years of the soviet occupation Novruz was a ‘banned’ celebration where most Azerbaijnais would have to celebrate in secret or not at all.

As it is a national holiday, Azerbaijani public will receive up to five days off work to celebrate. 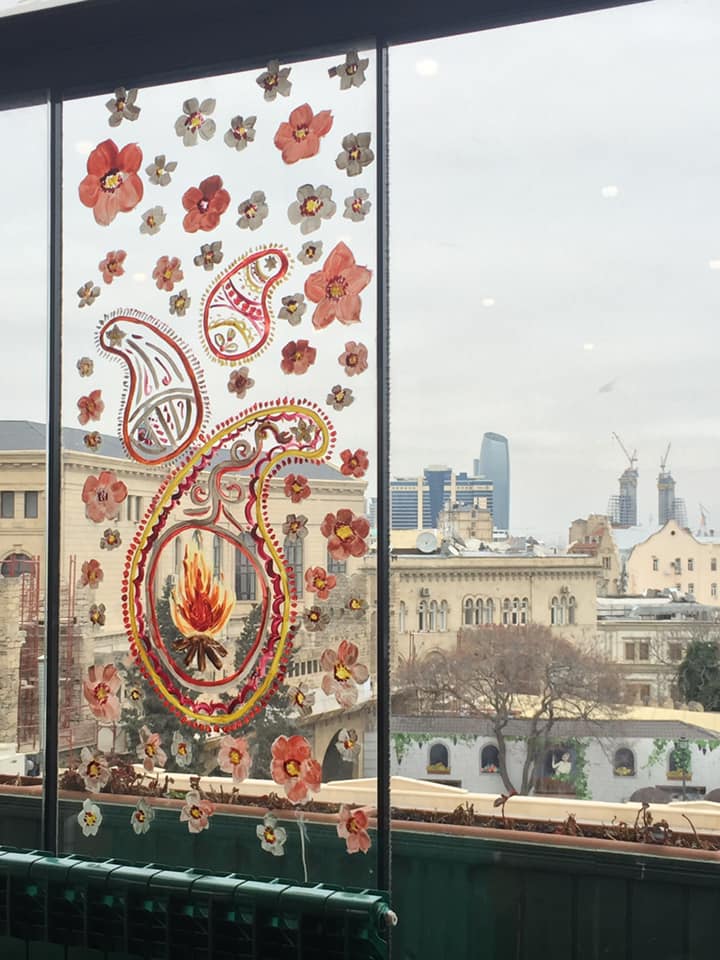 Azerbaijan culture is close to its heritage and therefore prioritises its peoples traditions. Therefore, it holds its centuries-old national traditions sacred. Many traditions of Azerbaijan are incarnated in hospitality, culture, folk beliefs, national clothes, national festivals and entertainment.

Azerbaijan traditions reflect the different elements and beliefs of various religions which have existed on its territory. Today many carefully preserved national traditions can be observed in a dramatised form during national feasts or events such as meeting guests of honour.

For further information about Azerbaijani holidays and traditions please see the link below: