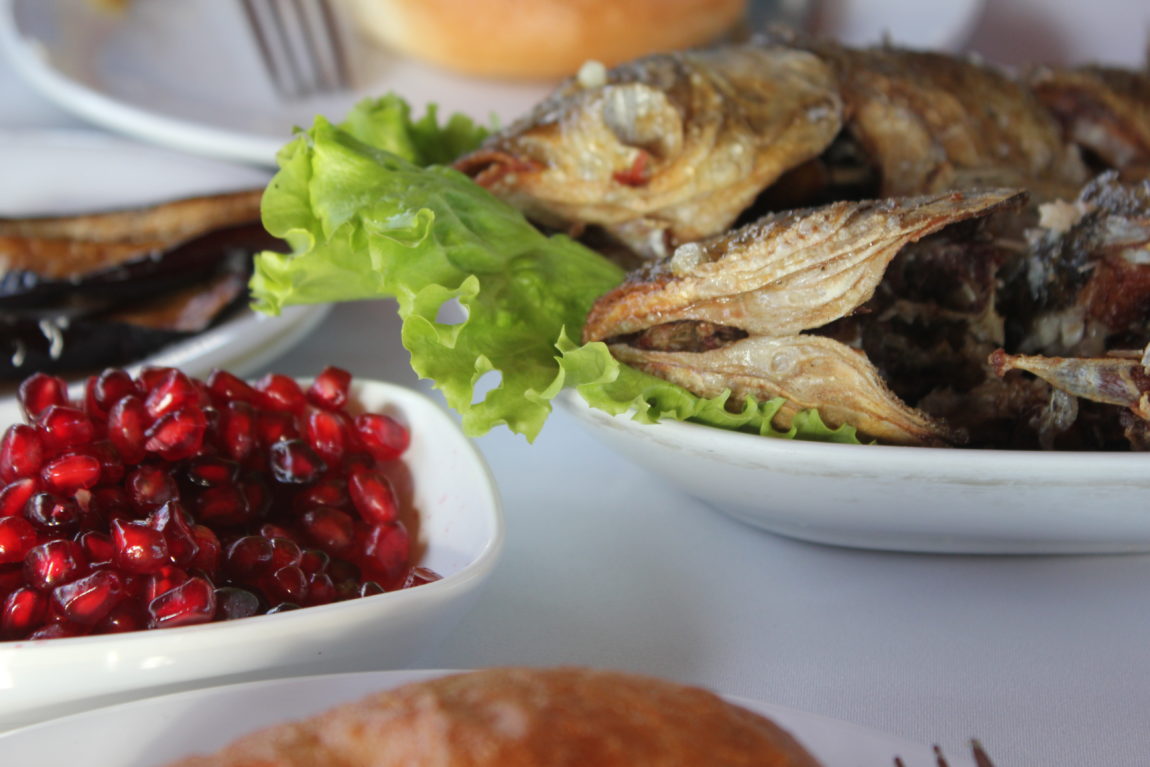 Azerbaijani food is very different to UK traditional food, for all of the right reasons! A fusion of Turkish and ‘Persian’ dishes, this Eurasian delicacy stays the mind as fresh, seasoned and indulgent.

Azerbaijani bread is a staple of any Azerbaijani meal and it is baked traditionally in large clay kilns onsite and bakery or restaurant. The smell typically draws you in for lunch, which includes a ‘tapas’ style of dishes including a start of fresh vegetables, herbs and bread, a main dish of spicy cooked meat (lamb is very popular, as if freshly grilled fish on the coast of Baku) and a digestive of tea and sweets. Soups are also popular, with creamy broths of herbs being a well known traditional Azeri dish.

If you are looking for a snack on the go, there are also options at cafes for pastries filled with cheese and sesame, Qutabs (containing spinach / meat or pumpkin) and of course sweets and cake! Baku is filled with Conditori’s and coffee shops, including a specialised Nutella shop just off of Fountain Square. 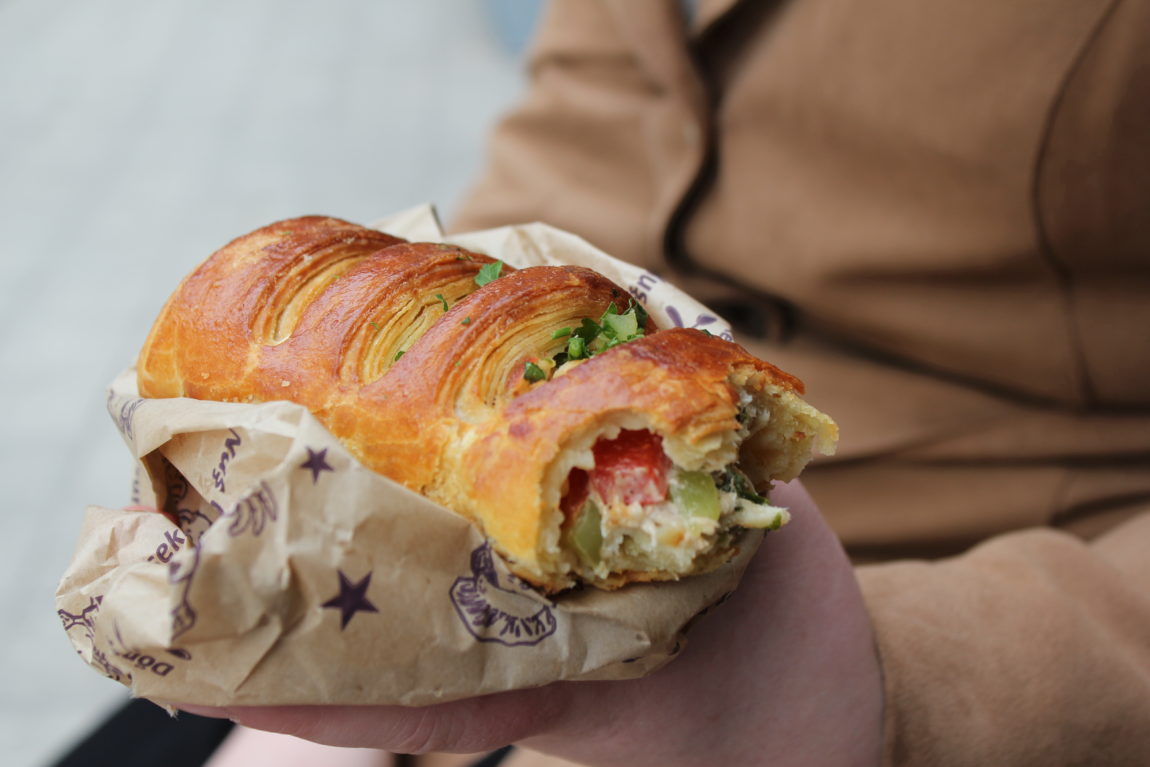 Of course Baku has always stood out for its link to the western world, and its not difficult to see this in the centre of Baku’s shopping district, with a huge Hard Rock Cafe, a Starbucks, a McDonalds and KFC being in close proximity to each other – however speaking with local people, the visits to these places are a ‘treat’ rather than a mainstream popular culture with most locals seeking cheaper (and more nutritional) food for lunches out.

Traditionally, and during the Silk Trade era Azerbaijan was known for its Karavansari’s – huge ‘hotel-like’ complexes purposely built with storage for animals and produce which was kept separately from living quarters. With travellers coming from the East and West stopping for food and entertainment in the largest cities, including Baku, Ganja and Sheki – there were a number of ‘specific’ Karavansari’s for different nationalities and cultures.

These hotels would cater for the needs of lots of different demographics of travellers, including large numbers of regular traders, workers, and of course rich ‘owners’ who would demand their own ‘booths’ to watch entertainment, surrounded by opulent scenery. Entertainment would also be opulent, with guests amazed by dancers and musical displays by local people. 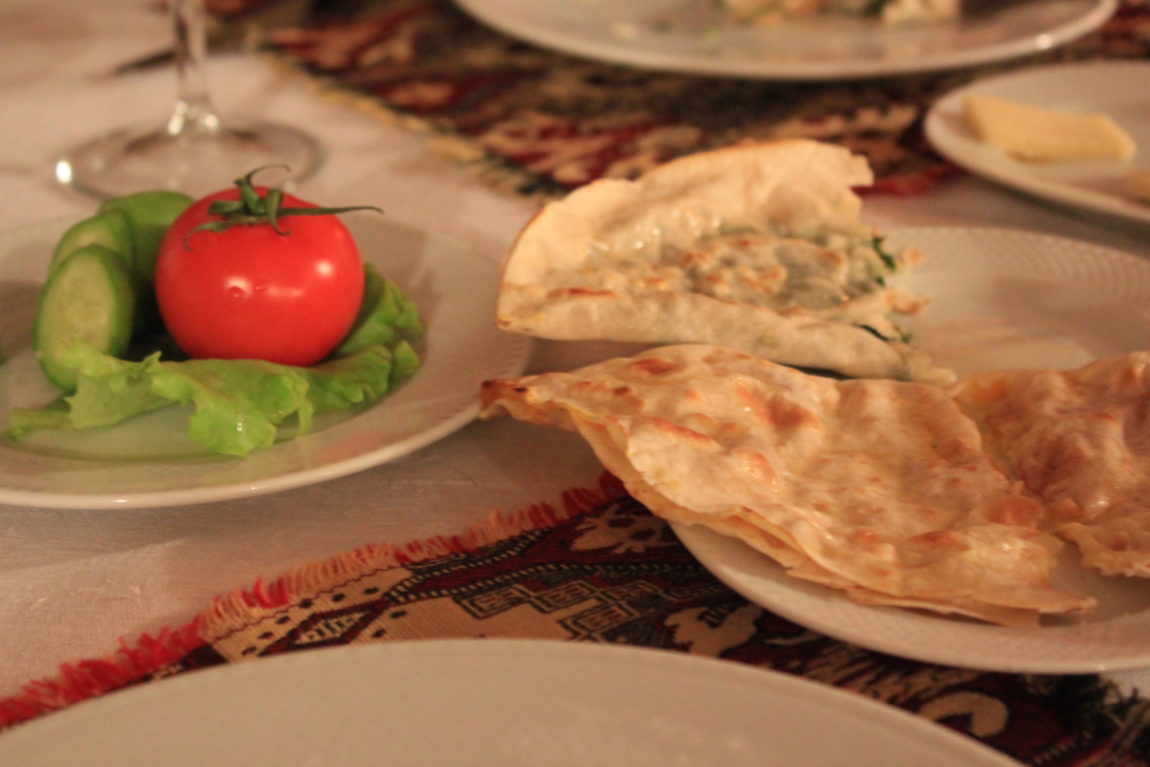 The traditional Karavansari design is still used now in Azerbaijan for a signpost to traditional food and drink in restaurants. Large carpets on walls and tables are almost a signpost that you will receive a good quality, and most importantly ‘home-cooked’ meal in this establishment.

See below a selection of vegetarian dishes that are traditionally eaten in Azerbaijan, and have a go at some Azerbaijani style home cooking! 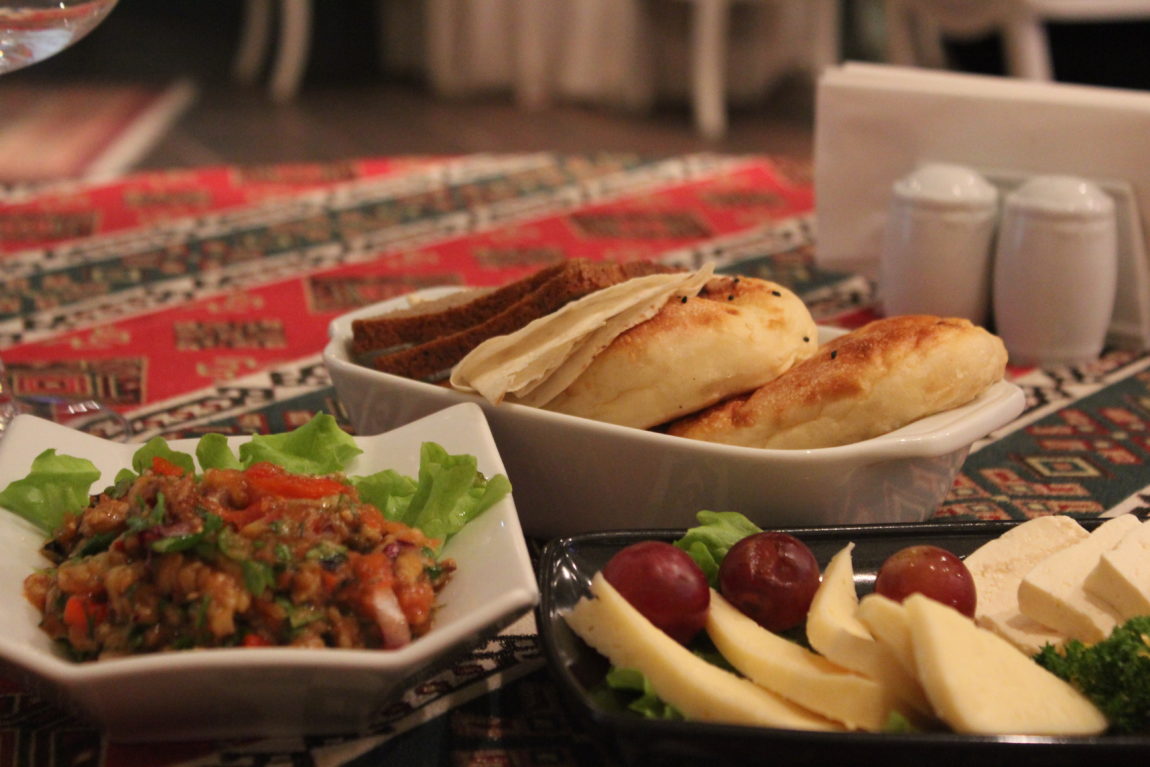 It is said that Azerbaijan may be one of the oldest wine making regions in the world, second only to Georgia, for evidence of wine residue found on the inner surfaces of 8000 year old jars in the village of Shulaveri. It is agreed however that wine originates from the caucus mountains and according to his book ‘Ancient Wine’, Dr. Patrick A. McGovern mentions evidence of grapes and possible winemaking dating to the 7th Millennium BC at Shomu-Tepe. Shomu-Tepe is located near Tuvuz in the northern region of Azerbaijan near the Georgian border.

Despite it’s background of general absence from alcohol due to religious culture – Azerbaijan has predominantly always been a wine-selling nation, ensuring that it has assisted the economy through sales to Europe – especially in the early 1800’s when there was a huge German investment in the wine growing regions around Ganja. It was only in the 1980’s that Azerbaijan’s wine industry was halted due to Mikhail Gorbachev’s move against drunkenness in the Soviet Union.

Despite its decade of reasonably recent non-production, Azerbaijan has quickly ‘re-grown’ their wine industries. Today there are 17 wineries in Azerbaijan, according to Timur Mamedov, Commercial Director of Aspi Winery, which sells the Savalan wine brand.

The growth of the wine industry internationally is at a steady pace, despite calls for popular wines such as the ‘Hillside Collection’ from Ganja to be readily available in Europe; and the countries taste for wine itself is developing – with large investment being placed on improving the quality of wine rather than quantities. Wine selections from surrounding regions are emerging in the UK market, with international shipping of Azerbaijani brands such as the ‘Savalan’ brand to the UK. 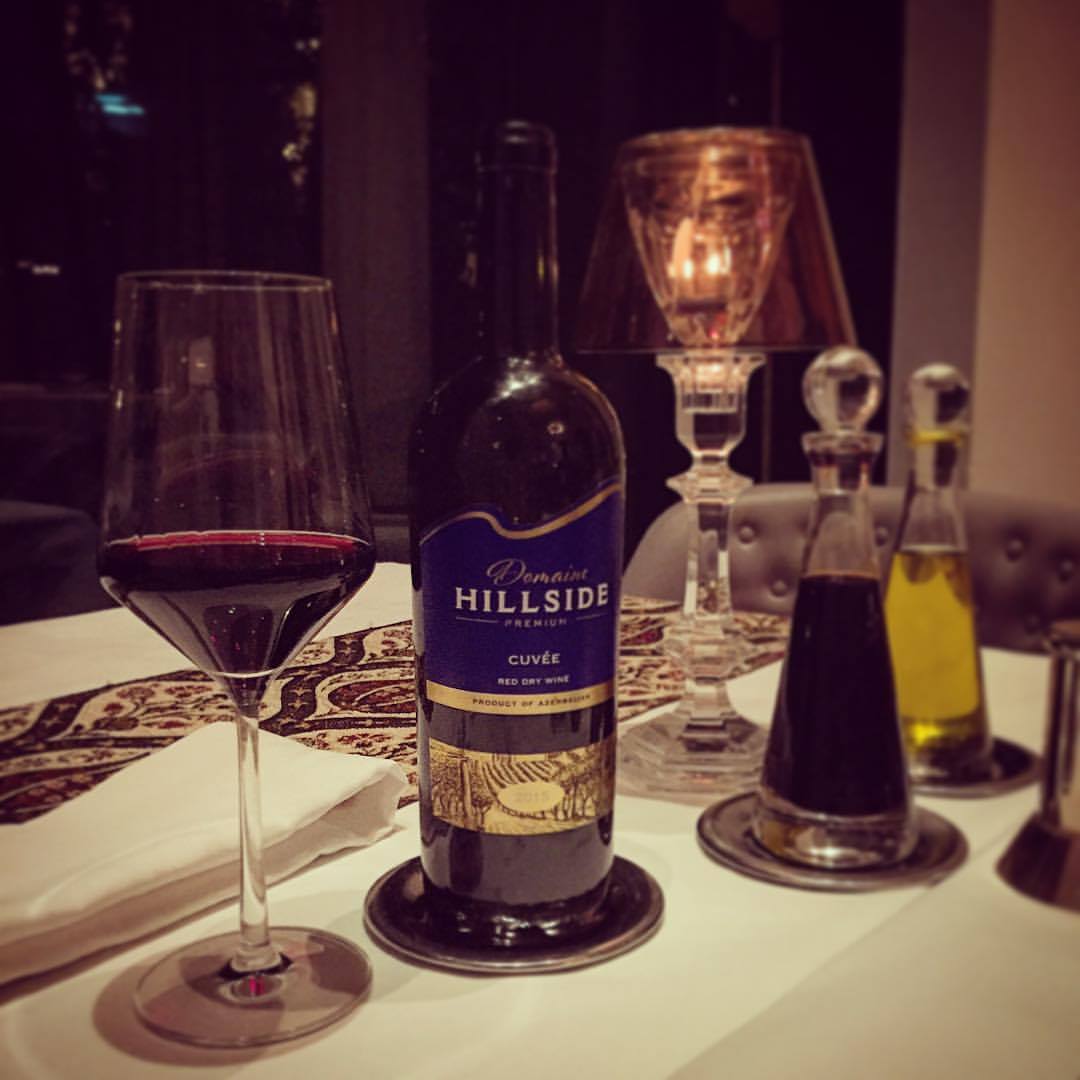 It is difficult to walk along the streets of Baku on a sunny day without seeing soirees of people nattering over a cup of tea. It sounds familiar to western contemporary coffee culture, however this tradition is cast in the roots of Azerbaijani culture.

Tea can be taken at any time during the day and you will often see tea shops open until late, 9 / 10pm at night where young people socialise away from pubs and clubs. Mainly herbal and fruit teas, iAzercay tea is the most common black tea on offer, which tastes similar to Assam. It is unlikely that you will ever be provided milk to have with your tea – however with a slice of lemon and a cube of sugar the beverage is delicious without.

It is a traditional hospitality trait for Azerbaijani’s to offer tea to guests before and after meals. It will be served in a crystal cut teardrop glass and often accompanies by sugary sweets and mixed nuts (cashews & almonds are common) as well as traditional sweets.

Despite always being a domestic hospitality ritual, the social element of drinking tea was in the past a man’s proactive, with women even being banned from ‘Chaykhana’s’ (tea houses) across Azerbaijan. Of course this is not an occurrence now – it is as common to see as many female groups as male in traditional and contemporary tea houses. 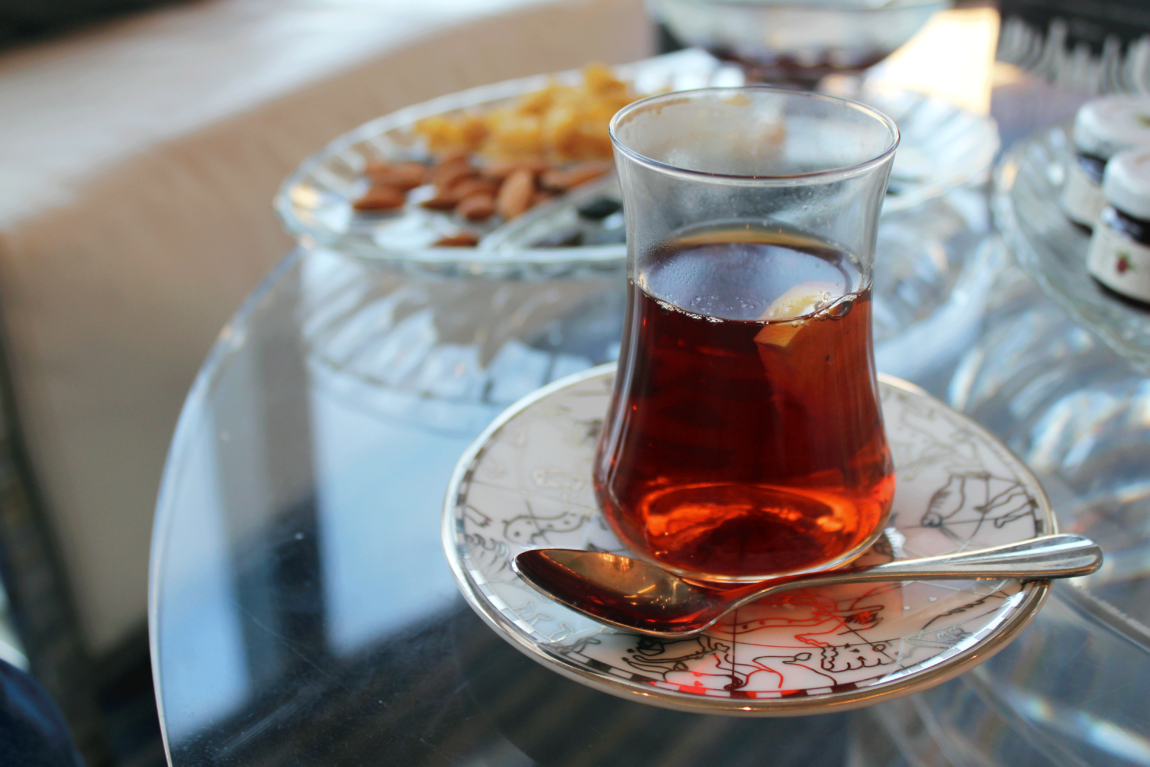